A train passes through the town of Alhandra, between the hills and the river. Óscar, who has spent twenty-five of his forty-eight years working at the same factory, is waiting to hear the court’s verdict on his employer’s insolvency claim. With production at a standstill and salaries overdue, Óscar and his co-workers continue to show up everyday for work, hoping to keep their jobs. But when the closing of the factory is confirmed, Óscar makes peace with the world again when he’s hired by the factory next door.

Willi Huber, 62 years old, hates computers. After being fired he finds a job as a waiter in a modern café. Though having a hard time serving the young people he saves a guest’s life by applying a laptop in an unusual way.

OUT OF THE BOX

A terrible job, an awful home – call centre agent Jana seems to be resigned to her pitiful life. Then the elevator gets stuck… 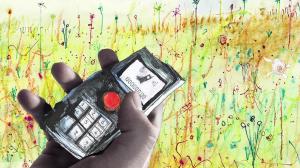 “Leaving home, ‘I’ got a phone call. As ‘I’ answered it, the house exploded. ‘I’ went to work and continued as normal”…

“Until Further Notice” is a film about the current labour market, in which our bodies are always ready to take a job, at the same time as those jobs are getting more and more temporary and the feeling of loneliness bolts under the skin.

WHERE HAVE THE FLOWERS GONE?

A piggy pursues his dreams in a big factory, but actually all efforts seem powerless.

In the vertiginous Bolivian highland, Cerro Rico, a mountain of long tradition and of great significance rises. Since over 400 years people there are mining for silver. The film offers an impressive insight into the hard and dangerous daily routine of Cerro Rico’s miners. Dust, hollow hammering and the headlights generate a unique and bizarre scenery, at one of the most dangerous workplace in the world.

The Ave Valley is, for more than a century, a territory seized by an imposing industry. Amongst ruins and operating factories, we descend the river on a journey alongside the banks of the present, unveiling the marks of thee past.

What we call Amazonia is actually a diversity of environments, artifacts, actions and actors. These elements are in a constant relation of genesis, producing each other in particular places and activities. Sometimes these geneses are arduous and intense, at other times skillful and patient. And they can also be immense. The Snake compares and connects different flows and forms of action in contemporary Amazonia.

THEIR LAND, OUR HOME

Weaving legend and reality, ‘Their Land, Our Home’ is a snap shot of the final days of the neighbourhood of Santa Filomena, one of Portugal’s last shantytowns. The film gives voice to those whose homes are being destroyed through the governments out dated slum clearance program. Through their stories we see that what is being lost are not just houses but a community, an identity and feeling of belonging. These are things that, once destroyed, are not easily rebuilt.

What’s hidden inside the smartphone of a refugee? It contains clues to a refugee’s memories, past, identity and some contacts from the world he had to flee from. This film narrates the daily life of a tiny mobile phone shop in one of the largest refugee camps in the world.

Kuaray, an Indian, struggle to survive in the big city, after the invasion of his country.

Maria is a tour guide on sightseeing in Sao Paulo’s downtown. Her dog Glaz accompanies her in the job. Maria is blind. Points of View is a short film shot on 16mm, with a sequence in light painting animation and a unique sound experience. This film will place the audience in the shoes of the characters.

Sabina Schmitt is probably the busiest woman in Berlin. She’s constantly on the run between meetings and phone calls, till one day her world collapses. Her busy behaviour seems to follow way other rules then she pretends.

Set against the backdrop of construction activity promising to fill in the empty spaces of the urban landscape with entirely new neighbourhoods, a story unfolds of an aging construction worker who, unlike his peers, has to drop all plans for the future after being diagnosed with a malignant tumour.

A group of research assistant came together to struggle to the decision of the Council of Higher Education (CHE) and the rectorates against the new rules, in 2008 at the Istanbul University, in Turkey. These new rules on job security would fire up to Turkey’s greatest research assistants’ resistance. 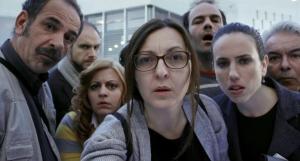 Friday afternoon. Nine people before a wall. Waiting. Who has the right to see? 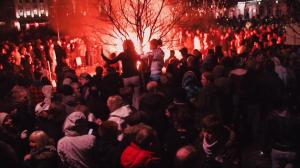 In response to widespread media silence and a budding wave of popular movements, this documentary explores how and why the people of Iceland resisted the measures imposed by their government following the crisis of 2008 and how they forced their government to resign in an attempt to forge a new political path. Filmed in Reykjavik between 2012 and 2014, the film meets the instigators of the revolution and follows the most important National Referendum in Iceland’s history, giving the Icelandic people the opportunity to decide whether to support a constitution that had been created through a popular grassroots movement. We also explore the lessons that can be learned from these experiences internationally. This documentary is a timely portrayal of a powerful social movement and its struggle to change the very meaning of democracy.

Freedom of the press is one of our greatest assets. We just need to make journalists aware of abuses and defend this fundamental right. But we must also focus on self-critical on the way we work. Freedom of the press is regularly put to the test. The short film “20zwoelf” is pushing this issue to the extreme: a Germany without a free press – unthinkable?

Documentary about blacklisting of union activists in the UK construction industry.

BEHIND THE STONE WALL

A small factory in the middle of Paris where for decades the finest cardboards were manufactured. A last look at a working world driven from our environment and a quiet, finely observed requiem.

Goodwin’s Way explores a Canadian town’s grassroots resistance to a coal mine 100 years after the controversial killing of miner and labour activist Ginger Goodwin. 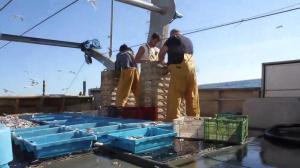 In Sant Carles de la Ràpita, one of the most important harbours in Catalonia, trawling fishing is still widely practised. One of the boats moored in the harbour is Tere Arbó. It’s crew are young people who do not exceed 30 years from la Ràpita. Through the stories of the crew of the boat, we show how humans throw into their work. Everyday, they go out to sea and contemplate its natural beauty. Although the reality of business is disastrous, fishermen leave the harbour every day to perform a hard and little paid work, hoping for an uncertain future. What is the bond between the man and the sea?

Moncho works for a big landowner in the north-East of Argentina. All alone in the immense plain and surrounded with animals, he watches, looks after and feeds the cattle of his boss.

THE MAN AND THE TOY

Toys tell stories of generations of family. Just fix them with the doctor, Mr Bonfim.

The BILFF/Mostra CineTrabalho’s team is proud to announce the Official Selection of the 2017 Festival’s Edition to be held in May, in Campinas, Brazil. The 2017 BILFF will present 27 films (shorts and features) representing 14 countries.